We’ve been actively using social media for several years now. Just think about the hundreds/thousands of posts you have on your Facebook, Twitter, and Instagram combined. Besides inactivating/deleting your accounts all together or manually going through all posts, it seems impossible to delete just the embarrassing/shameful posts, right?!

Well now a new app, Clear will do just that. Based on a Mashable article, Clear will flag and highlight posts based on:

Included below is an example of how posts will be flagged using Clear. 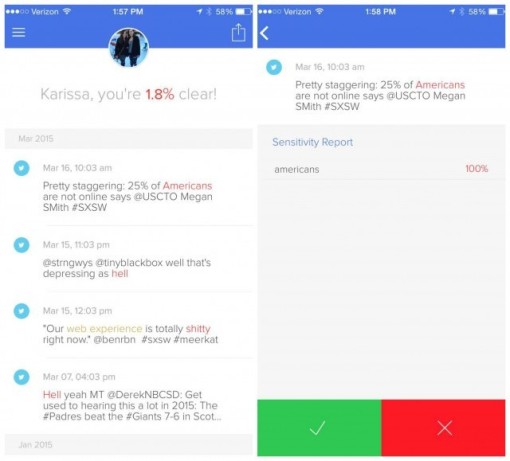 I’ve used a social media monitoring platform, Mention in the past that included a sentiment analysis as well. Although the algorithm and sentiment analysis results would get better over time, there was still initially a lot of monitoring and tedious work that needed to be done to ensure the right posts were flagged. In fact, it took several months for the platform to achieve an 80% level of accuracy.

Clear’s “posts are… analyzed for their tone and sentimentality using IBM’s Watson supercomputer” (Rhee, 2015). Clear’s founder, Ethan Cazhor agrees that “the most challenging part of this is determining which tweets are actually offensive, and that’s something that will take a while to get really good at” (Miller, 2015).

Currently the app only works for text-based posts, however they company plans to expand to photos and videos as well. Once you delete the post through the app, it’ll be removed from your social media account as well. Although the Tweets may be deleted, I wonder how long it would take for that post to be fully removed from search engine results (i.e. Google). In addition, I am curious to see what Clear will do to decrease the amount of initial leg-work involved to have a 95% level of accuracy for its sentiment analysis.

Rhee, D. (2015, April 20). An App That Puts You in Control Over Your Online Reputation. Retrieved April 21, 2015, from Good: http://magazine.good.is/articles/clear-app-online-reputation